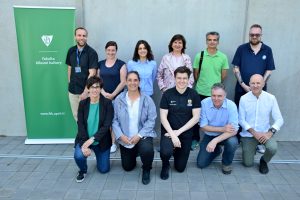 What are young men’s mental health components? And the role and use of physical activity in mentoring?

Starting from these questions the partners of SSaMs – Training sports students as mentorsgathered in the second project meeting, which took place at the Palackého University of Olomouc(CZ) on May 21st and 22nd, started a reflection that will guide the development of educational materials aimed at sports students.

The learning materials of SSaM will transfer to undergraduate sports students the skills necessary to support boys and young men through sports, motivate them to stay in school as well as to support their mental and emotional health.

The reflection considered among other some factors such as:

SSaMs partners discussed also the results of the needs analysis conducted in the past few months and addressed to the academic staff and students of sports sciences faculties, from UK, Ireland, Czech Republic, Spain, Greece, Italy and three extra countries: Cyprus, Finland and Sweden.

The survey was conducted:

It has been found that in the European context the development of gender-specific initiatives and policies is a fairly novel factor and the same is also for the university sports departments.

The results of the needs analysis together with the material developed within the Mangage initiative will form the basis of the SSaMs educational material, on which the partners will work in the coming months.